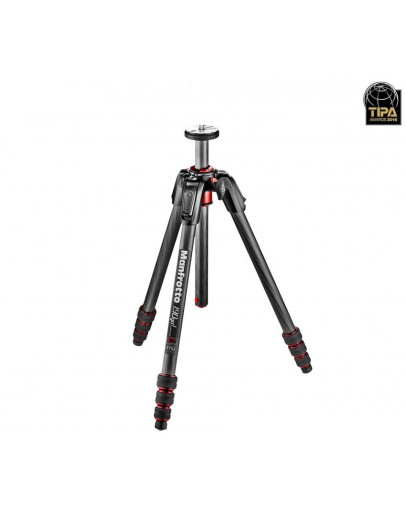 Manfrotto's 190go! M series high-performance carbon fibre tripod is the ideal solution for professional photographers who want maximum performance and lightness combined with classic design for their most demanding projects.

This professional tripod is the lightest, most compact solution in the 190 range. It mounts the M-lock system, which is designed for photographers looking for a fast locking mechanism allowing the tripod to be setup in seconds , leaving the user free to concentrate on the shot they wish to capture.
The M-lock can be engaged or disengaged with a single 90 ° rotation movement. Besides enabling immediate set up, the M-lock is highly ergonomic and ensures precise movements and high stability , even with heavy loads. Moreover, this mechanism has no protruding parts, which means the 190go! M series can slip into and out of its storage pocket effortlessly.

The tripod also has a built-in 90 ° column mechanism in its top casting, which stays safely stored away until needed. When it's time to use it, just raise it with a single finger, letting the centre column swing out into the horizontal position. Combined with the tripod's four leg angles, this mechanism gives perfect stability for shooting on uneven ground.

The new 190go! Carbon M-series owes its professional tripod status above all to its new Carbon Fibre tubing. Indeed, this tripod's carbon fibre legs are the perfect mix of supreme lightness and stability. The carbon legs, combined with the twist locks make this tripod the most portable among the Manfrotto professional range.

The 190go! Carbon M-series can easily be set to 4 independent leg-angle positions, enabling photographers the versatility of easily changing shooting perspectives intuitively and effortlessly finding the right tripod height without losing focus on the shot at hand. Just like the regular versions of Manfrotto's professional grade 190 tripods, the Easy Link attachment in its top casting turns the 190go ! M-series into a mobile studio, allowing it to hold a LED light reflector or other accessories, for maximum creative freedom, enabling shots that were previously only achievable with heavily accessorised tripods.